What is the best road in Scotland

Posted on March 19, 2012 by photographicviewscotland 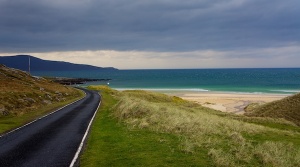 The road around the Island of Harris takes you past stunning beaches on the Atlantic coast.

Driving around Scotland means choosing what is the best road. The right choice over the obvious choice can mean you get on some of most spectacular roads in the world, in our humble opinion.

Without question the road around the Isle of Harris is one you can’t miss if you are there. It is the only way around.

This image is from our growing gallery of Harris images. The single track road hugs the coastline past beaches and ocean.

As you drive west from Tarbert (An Tairbeart) through the 3 billion year old rocky lunar landscape with its ragged coastline and dour peaty colour, you may wonder why this island is so loved, but as you reach the final rise of a 10 mile journey from the east and just before the road winds down, there laid out before you is this view. It is one of the reasons we keep going back. I challenge anyone who has not passed this way before to do so without the urge to stop and take there own picture.

The view from the Tarbert to Luskentyre road on Harris.

I got me thinking of other roads people may love. For example, yesterday we decided to go from Perth to Glasgow without using a motorway or dual carriageway. Easy – go through the Trossachs via Crief, Callander, Aberfoyle, Drymen and enter Glasgow via Bearsden.

One choice of road is through the Queen Elizabeth’s Forrest between Callander and Aberfoyle. There is a straighter road but this way must count as one of the windiest roads on the planet. It takes you up past Ben Venue and past a road called three loch road. The road is actually called Dukes Pass and here is a You Tube video of someone biking it.

Soon I hope to compile a list of the most exiting and dramatic roads in Scotland. Any suggestions welcome. Watch this space.

Photographers of Scotland's landscape and remote places and arts and craft makers. Mhairi is also making needle felted animals under the name of the Woof in the Wool. We live in Abernethy in Perthshire, Scotland.
View all posts by photographicviewscotland →
This entry was posted in Harris, Trossachs and tagged Aberfoyle, Bearsden, Drymen, Dukes Pass, Glasgow, Harris, Harris Outer Hebrides, Road, Scotland, Tarbert. Bookmark the permalink.

1 Response to What is the best road in Scotland