Posted on September 27, 2013 by photographicviewscotland

Ardnamurchan is the most westerly point on the British mainland prides itself according to the local tourist association on being a best kept secret. We are heading back there for the third time in two years. I wonder what the special attraction is for us.

It has outstanding viewpoints of the small isles of the Inner Hebrides as Rum, Eigg are close and you can see out to Tiree on the horizon. Being on the islands is wonderful but the best pictures of them are often from the shore of the mainland. Is this the same as the best view of a mountain is looking up rather than looking down? 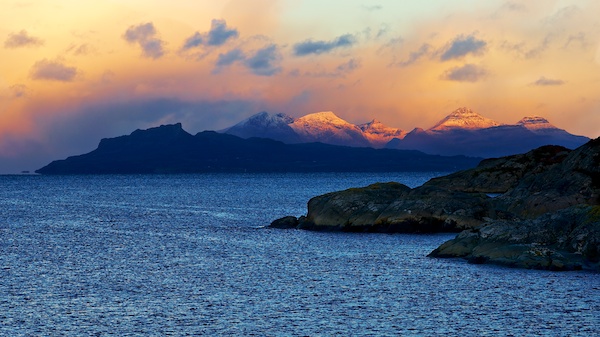 The Cuillin of Rhum lit by sunrise over Eigg in the middle. Taken from Ardtoe in Ardnamurchan. ©Paul Carroll 2012

The lighthouse at Ardnamurchan point was built in 1849 by Alan Stevenson, uncle of Robert Louis Stevenson, whose family designed most of Scotland’s lighthouses over a period of 150 years. ©Mhairi Morrison 2012

We are staying in Portuairk, which is the closest village to Ardnamurchan Point and next to Sanna Bay. We are looking forward to some glorious sunsets as well as a walk on Ben Hiant and a boat trip from Kilchoan to Tobermory on the Isle of Mull.

We will be taking plenty of photographs so let us know if you have any requests. While researching our next trip I came across a fellow traveller’s site. Wildlife photographer Graham Olley has pulled together a website All About Ardnamurchan using  his photographs of the area and also provide easy to read maps to help people find the locations he visited.

When we  get back we hope to update our Ardnamurchan gallery with some excellent images. Like this one from our last visit.

On the road to the coastal villages of Kilmory and Ockle there is an excellent view north from the junction with the B8007 to the islands of Rùm, Eigg, Muck and Canna. ©Paul Carroll 2012

Photographers of Scotland's landscape and remote places and arts and craft makers. Mhairi is also making needle felted animals under the name of the Woof in the Wool. We live in Abernethy in Perthshire, Scotland.
View all posts by photographicviewscotland →
This entry was posted in Ardnamurchan, Locations and tagged Ardnamurchan, Ardnamurchan Point, Eigg, Isle of Mull, Kilchoan, Portuairk, Sanna Bay, Scotland, Tiree, Tobermory, Tobermory Mull, west coast. Bookmark the permalink.

1 Response to Returning to Ardnamurchan