Posted on July 16, 2014 by photographicviewscotland

Its been a month since we got back from the Hebrides and I am only now getting around to updating our galleries. Check out the new additions to our Isle of Lewis gallery.

I am afraid I suffer from a football related syndrome and it induces a trance like state during the month-long World Cup in June.

This year for our annual trip to the Hebrides we stayed on the Isle of Lewis in a family friend’s house in Gravir in the Lochs area. This meant we travelled more than before around Lewis and fell in love with the western road along the atlantic coast of the island.

This is the view from the beach at Bosta on Great Bernera, an island of the isle of Lewis (but connected by a bridge). © Paul Carroll 2014 There is more of this on www.photographichview.co.uk

The road from the expanse of Uig Bay in the south of Lewis travels past several stunning bays such as Valtos, Reef,  Great Bernera (Bosta beach) and then up past the famous Callanish Stones and another fabulous beach at Dalbeg. We also spent some time at the Morvern Gallery in Barvas, which included some fantastic originals by Pam Carter.  The road culminates at the Butt of Lewis where there are rugged cliffs and stacks.  The wonderful Port of Ness harbour is a good place to rest a while and call in at the Harbour Gallery of Anthony Barbour.

There were far more motor homes and camper vans on the island roads this year. The Western Isle is ideal territory for the travelling camper. The ferry pricing has changed making it far cheaper for vans under 5 meters. We fancy doing it that way ourselves next year. There are plenty of quiet coastal areas to park up and watch the Atlantic sunsets from the beach.

Here are a selection of some new shots from the Lewis Gallery.

A popular view on from the village of Achmore across the moor towards the hills at Uig and North Harris. This particular red roof is appearing in several photographers galleries. This shot has particular good late evening light. ©Paul Carroll 2014 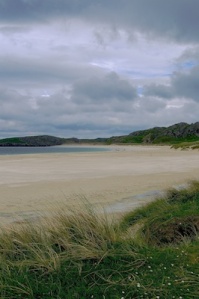 Photographers of Scotland's landscape and remote places and arts and craft makers. Mhairi is also making needle felted animals under the name of the Woof in the Wool. We live in Abernethy in Perthshire, Scotland.
View all posts by photographicviewscotland →
This entry was posted in Lewis, Locations, Publishing and tagged beaches, coast, Great Bernera, Hebrides, Islands, Road, Scotland, stones, Uig, Western Isles. Bookmark the permalink.