Posted on November 16, 2014 by photographicviewscotland

Amongst an incredibly busy few months we managed to fit in a week-long trip to the magical landscape of Inverpolly in the North West Highlands. We hadn’t reckoned when we booked we would be moving house just two weeks prior. The chance to get a break from lifting and shifting stuff around was a welcome one. Despite only getting about one day out of seven without torrential rain and overcast grey sky we still managed to capture some fantastic images. 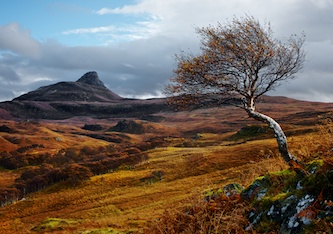 Stac Pollaidh rises up from carpet of autumn gold and purple. ©Mhairi Carroll

Our main goal in travelling to the North West Highlands was to get a great shot of Stac Pollaidh and I think in this one we did.

The hills of Assynt may not be the tallest but they create this fascinating fantasy wilderness in the way they rise up proud from the surroundings. The road through the Inverpolly Nature Reserve, about 15 miles north of Ullapool, takes you around the mountains. To see them all in a grand sweep you need to head towards Enard Bay. The horizon is punctured by a series of strange and highly identifiable shapes.

The hills of Assynt looking across the range from the road to Enard Bay. ©Mhairi Carroll

For most of the week Suilven, the dome-shaped mountain that rises up above the town of Lochinver, was hidden from us by low cloud. Some days the torrential rain even obscured it from us when we were, according to the map, right beside it. However, at least on one day it revealed itself to us from its flank. 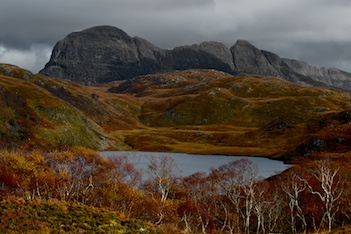 One of the most recognisable hills in Scotland is the dome shaped hill above Lochinver – Suilven. ©Paul Carroll

We will be returning here as part of our plan to create a gallery of all the great landscapes in the Scottish Highlands and Islands.

Despite the weather , we found some great locations and a great wee pub in Polbain on the Coigath  coastal road. Lochinver also has some great pubs ( with famous pies) and on the road out a bookshop appears in the middle of a forrest. So even if it rains there is somewhere to go.

Next time we will be hoping we can get out a bit more but even so I think we made a great start to photographing this amazing part of Scotland.

We have just got round to publishing our images from the trip and you can see the first set in our North West Highlands Gallery.

Photographers of Scotland's landscape and remote places and arts and craft makers. Mhairi is also making needle felted animals under the name of the Woof in the Wool. We live in Abernethy in Perthshire, Scotland.
View all posts by photographicviewscotland →
This entry was posted in Inverpolly-Assynt, Landscape, Locations and tagged Highlands, hills, Inverpolly, Inverpolly Nature Reserve, Lochinver, mountains, North-West-Highlands, Scotland, Stac-Pollaidh, Suilven, wilderness. Bookmark the permalink.